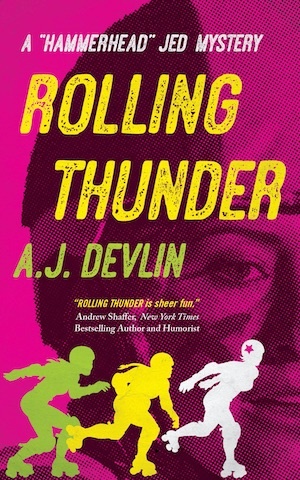 Today in our new books column we’re going to lighten the mood with two titles that take themselves far less seriously than most of the fare on our site. AJ Devlin has set a novel in the world of roller derby with an ex pro wrestler as the main character, while Zachary Colbert’s novella, well, it’s about a murder on a TV game show. We think you deserve a little laughter with your crime fiction, but if it’s not what the doctor ordered then we’ve got some serious stuff too including murder in Texas (hot) and murder in Iceland (coooold). Enjoy.

We love the cover of Rolling Thunder, the second in AJ Devlin’s series featuring former pro wrestler ‘Hammerhead’ Jed Ounstead, out 15 May. He’s now a fully-fledged private investigator and riding high after the success of his first case, but pride comes before a fall as Jed takes on a case set in the rough and tumble world of women’s roller derby. Expect over-the-top-rope humour and elbow-to-the-face adventure in a tale that features, among others, a high-class bookmaker with a yen for racing dachshunds, a kinky painter with a special technique for producing art, and oodles of banana milkshakes.
Pre-order now on Amazon

Former Crime Fiction Lover contributor Zachary Colbert has become a bona fide crime fiction author, and Snog, Marry, Murder is a 62-page novella with a touch of humour to it and some interesting characters. Things get underway when a contestant on a TV game show is murdered and its production coordinator, Charlotte Chaplin, sets out to solve the mystery. It’s a classic whodunnit with the reader more or less invited to try and solve the case as Charlotte uncovers clues and confronts her suspects. Snog, Marry, Murder is out now.
Buy now on Amazon

Throwing Off Sparks by Michael Pool

Now meet ‘Rowdy’ Riley Reeves, who is making her crime fiction debut on Kindle on 12 May. She’s a private investigator in East Texas who specialises in cases of at-risk girls – and those cases often lead her into all kinds of trouble, too. When a socialite couple hire Riley to protect their daughter Carmen from a stalker, Riley quickly learns that the poor little rich girl has been mingling with some mighty unsavoury characters. And if that’s not enough, Riley’s reformed alcoholic brother Chip arrives on her doorstep. He’s fresh out of jail and about to fall off the wagon, spectacularly. Can things get any worse?
Pre-order now on Amazon

The Mist by Ragnar Jonasson

Ragnar Jonasson acquaints us with The Mist, a common phenomenon in his home country of Iceland, where the weather can be, well, criminal. This is the third book in his Hidden Iceland series and begins on a remote farm in 1987. A snowstorm has a couple pinned in their house a bit like this pandemic, but then there’s a knock on the door. Who could be out in weather like this? Should they let him in? Of course not, but they do anyway and The Mist details the fallout of that unfortunate decision and Detective Hulda’s attempt to solve the ensuing mystery. It’s out now.
Buy now on Amazon

Who We Were by BM Carroll

Childhood crimes come back to haunt the perpetrators in BM Carroll’s new psychological thriller out on 7 May. School reunions can be horrendous at the best of times, but when a group of former friends (and enemies) get back together after 20 years, it’s a recipe for disaster. Katy is desperate to show she’s no longer the shy wallflower, while Annabel, who ruled the school until a spectacular fall from grace, has other fish to fry. Meanwhile, Zach, popular and cruel at school, says he’s turned over a new leaf – something taken with a pinch of salt by Robbie, who was always the victim. A terrible secret binds them together and someone will stop at nothing to take revenge…
Pre-order now on Amazon