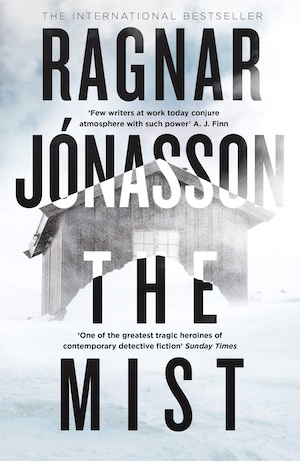 Translated by Victoria Cribb — The Mist completes – or starts, depending on how you read it – Ragnar Jonasson’s Hidden Iceland series. The first in the series, The Darkness, introduced us to Hulda Hermansdottir, a police detective on the verge of retiring from the Reykjavik police force. It provided the background and revealed large parts of the story of Hulda’s life and was followed by book two, The Island.

The Mist is set in 1988 – more than 40 years before The Darkness. In February of that year, 40-year-old Hulda is investigating the disappearance of Unnur, a 20-year-old woman from Reykjavik who spent her gap year hitchhiking across Iceland. Even though her investigation proves fruitless, she remains adamant in solving the case.

We also get to meet Hulda’s husband, Jón, a successful businessman and Dimma, her teenage daughter who seems to be acting like a typical moody teenager. When a traumatic incident uproots Hulda’s stable home life, she blames herself for the destruction of her family and regrets not dealing with the tell-tale signs earlier. As an escape mechanism she avoids her husband and throws herself head-first into her police work.

Two months after Unnur’s disappearance Hulda is called out to a crime scene in a remote part of eastern Iceland where an elderly farmer and his wife are found murdered. Jonasson couldn’t have created a more remote and harsh setting for a crime scene. The victims have lived in almost complete isolation, with minimal human contact, surviving in the toughest winter conditions. Nonetheless, they have made do with each other’s company, maintaining the only farm in the area. We are given a detailed insight into their relationship and personal history through small descriptive details. Jonasson perfectly captures the claustrophobic mood of a remote physical setting, but also of a marriage where one party is trapped by circumstances and the past.

The first part of the novel describes the events leading up to their murders. Just before Christmas a stranger shows up at the door claiming to be lost and separated from his hunting group. Being inherently trustful and upstanding people, Erla and Einar invite Leo into their home to recover from his ordeal. Although Einar welcomes him with open arms, Erla is exceedingly suspicious from the moment he steps across their threshold. When weather conditions worsen, trapping the couple with their visitor, an already hostile situation escalates rapidly with dire consequences and their safe haven turns into a prison. But this isn’t a whodunnit as much as a whydunnit, which is the mystery Hulda has to unravel.

At the core of The Mist lies human tragedy and the depiction of how a series of random events and actions can cause immeasurable damage. This is applicable to Hulda, the murdered couple, as well as the family of the missing girl. Loss and grief is the thread that binds them together.

Jonasson’s use of reverse chronology throughout the Hidden Iceland series won’t be to everyone’s taste. He gave us all the necessary information regarding Hulda’s life in The Darkness. So, we go into The Mist knowing what lies ahead and how Hulda’s life will pan out. Does this spoil the series? Strangely enough it doesn’t. This knowledge amplifies the tension. Add to this the mysteries of the murders and Unnur’s disappearance and there are sufficient uncertainties to keep your interest piqued.

This author is becoming the king of atmosphere. In The Mist he creates the perfect combination of dread and claustrophobia. Of course the weather has the starring role – how can it not with a novel set during an Icelandic winter? More than just being the perfect element for isolation and indirectly enabling the murders to take place, it creates a sense of place. This isn’t necessarily unique in Nordic noir, but Jonasson has a particular knack for pushing it a little bit further and creating a unique atmosphere of complete desolation, which is fully captured in the translation.

“…the scene that met her eyes was bleak and featureless, all landmarks obliterated by a smothering whiteness. It was a grey day, the clouds swollen with unshed snow, scudding overhead with the fierce wind, and in a couple of hours it would be dark.”

Even though The Mist is loaded with mood and setting its plot doesn’t disappoint. As with any good crime novel, there has to be a twist you didn’t see coming or a convergence of plot lines you didn’t expect. All the boxes are ticked here.

The only regret is that Hulda takes a backseat for a large part of the book and the first section focuses mostly on Erla and Einar, even though the chapters alternate between the two narratives. Of course, if you’ve already read the first two books in the series, you’ve had your dose of Hulda. If not, you can always start with The Mist and work your way backwards. This is the benefit of the Hidden Iceland series, it can be read from both sides and I suspect that most of us will want to reread it in a different order after finishing the series. If that’s not a testament to good writing, I don’t know what is.