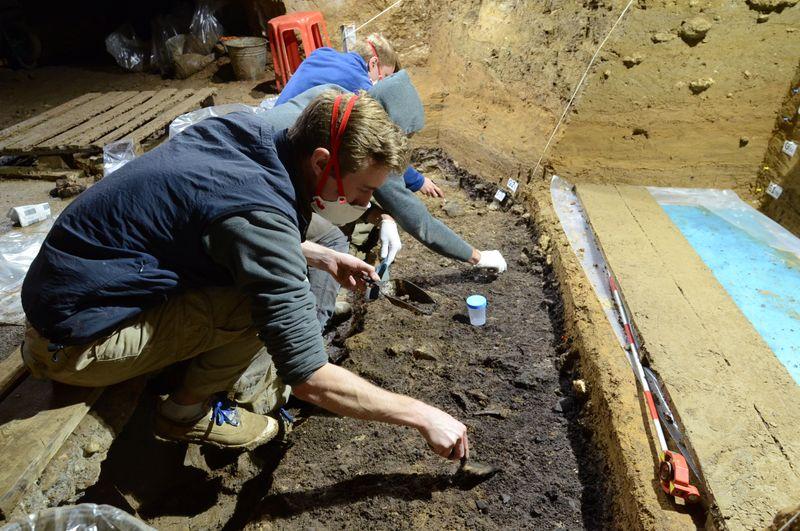 WASHINGTON (Reuters) – Fragmentary bone fossils and a molar found in Bulgaria dated to roughly 45,000 years ago show that Homo sapiens populations swept into Europe – until then a bastion for the Neanderthals – earlier than previously known, scientists said on Monday.

Researchers engage in excavations at Bacho Kiro Cave where Homo sapiens bones dating back about 45,000 years were recovered along with a rich stone tool assemblage, animal bones, bone tools and pendants near Dryanovo, Bulgaria, in an undated picture released May 11, 2020. Tsenka Tsanova/Handout via REUTERS

Researchers said DNA from the five fossils from Bulgaria’s Bacho Kiro cave demonstrated they belonged to anatomically modern Homo sapiens. This evidence resolved a debate over who made a remarkable array of artifacts at the site including stone and bone tools and pendants made of the teeth of cave bears – it was our species in the cave and not Neanderthals.

The research pushes back by thousands of years the arrival of Homo sapiens in Europe, a milestone in the history of a species that arose in Africa about 300,000 years ago and then spread worldwide.

Human remains from the cave range from 43,000 to 46,000 years old while associated artifacts were up to 47,000 years old, said paleoanthropologist Jean-Jacques Hublin, director of the Department of Human Evolution at the Max Planck Institute for Evolutionary Anthropology in Germany.

“It looks like this is the time of the earliest wave of modern humans in the mid-latitudes of Eurasia,” Hublin added, with evidence existing of Homo sapiens presence relatively soon after at similar latitudes from Moravia to Mongolia.

There is a debate over what doomed the Neanderthals, including the possibility that our species wiped them out after thousands of years of interactions including interbreeding that left an indelible mark on the human genome.

“In my view, Neanderthals disappeared from Europe because of the competition with our species. However, this did not occur overnight,” said Hublin, lead author of research published in the journal Nature alongside a second study in Nature Ecology & Evolution.

Artifacts include pointed flint blades and numerous personal ornaments including a bead made of mammoth ivory and the bear-tooth pendants. Those pendants have striking similarities to ones made later by Neanderthals in western Europe, indicating our closest evolutionary cousins adopted aspects of Homo sapiens culture.

“The DNA evidence is now secure that Neanderthals and Homo sapiens interacted when they came into contact with one another. In some places those interactions may have even been ‘friendly,’ for lack of a better word,” said New York University anthropologist and study co-author Shara Bailey. “We carry their DNA and they were influenced by our cultural innovations.”