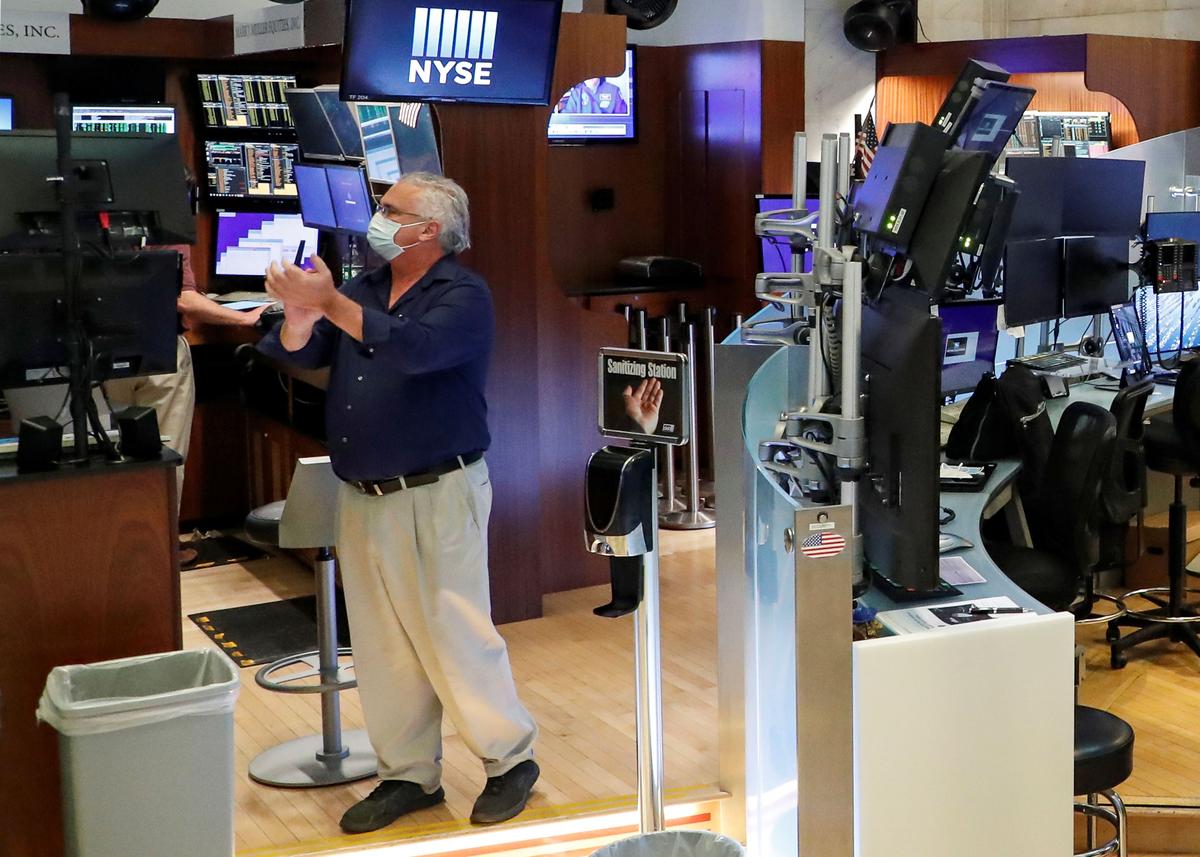 BENGALURU (Reuters) – This year will be the worst for many world stock markets in nearly a decade at least, although a majority of equity strategists polled by Reuters say top indexes will not revisit lows struck this March following an explosive rally since then.

FILE PHOTO: A trader wearing a mask reacts at the closing bell, on the first day of in person trading since the closure during the outbreak of the coronavirus disease (COVID-19) on the floor at the New York Stock Exchange (NYSE) in New York, U.S., May 26, 2020. REUTERS/Brendan McDermid/File Photo

Macroeconomic data points to a deep global recession, with widespread expectations among economists and longer-term fund managers for a slow and elongated rebound, not to mention warnings from the Federal Reserve as well.

But equity markets, flooded with central bank cash, have rallied over the past two months on expectations of a sharp, vigorous recovery, even as the coronavirus pandemic is still spreading, having infected more than 5.7 million people worldwide.

The May 12-27 Reuters polls of over 250 analysts across Asia, Europe and the Americas, showed predictions broadly focused on economies and businesses swiftly reopening from lockdown, with 11 of the 17 indexes expected to rise from here by end-year.

That is despite several risks still in play, including: a second wave of the virus; uncertainty on when or if ever company earnings will fully recover; smoldering U.S.-China tensions; and the upcoming U.S. presidential election.

That disconnect between what equity markets are pricing in and economic prospects is coming under closer scrutiny.

“I keep repeating that some markets are not properly reflecting reality and that the power of markets is not in their elevated heights but in their honest price discovery,” noted Michael Every, global strategist at Rabobank.

“They are supposed to be the little boy pointing out that the emperor has no clothes. If they don’t do that, they aren’t good for much,” he wrote.

Subodh Kumar, an investment strategist at his own consultancy, notes, as do many, that stock markets are trading mainly on the unprecedented wave of stimulus from central banks and governments.

“But macro weakness is also important, as after a major employment shock and a possible COVID-19 second wave, consumers may be slow to recover globally. The Fed has indicated a very slow recovery,” he said.

At a time when the U.S. economy has suffered its biggest job losses since the Great Depression of the 1930s, the S&P 500 .SPX is up over a third since its March 23 low.

Yet despite unprecedented monetary and fiscal stimulus, the 17 indexes polled on – all in the red so far this year – were forecast to end 2020 lower than where they started the year. (For a graphic on the global economic response to COVID-19: tmsnrt.rs/2L5pI43)

This year’s predicted performance for 11 of those 17 indexes would be the worst in nearly a decade at least. For eight of the 11, it will be the worst since the financial crisis a dozen years ago.

While 2021 was projected to be better for stocks than this year, only four indexes were forecast to recover 2020’s lost ground and 16 were not expected to reclaim pre-pandemic peaks until at least 2022.

About three-quarters of respondents said the risk from the current macro and jobless situation posed a “very high” or “high” risk to their outlook for the next three months.

FILE PHOTO: A trader walks past the German DAX Index board on the trading floor at the Frankfurt stock exchange, Germany, June 24, 2016, after Britain voted to leave the European Union in the EU BREXIT referendum. REUTERS/Ralph Orlowski/File Photo

The uncertainty on when company earnings will start to recover has also hurt the outlook for global stocks.

Asked when the low point for earnings would be, around 43%, or 40 of 93, respondents said this quarter. Nearly 27% picked the third quarter and the remaining 30% said the fourth quarter or later. But growth in year-on-year profits is not expected before the first quarter of 2021 for companies listed on the S&P 500 .SPX and the STOXX 600 , according to I/B/E/S data from Refinitiv.