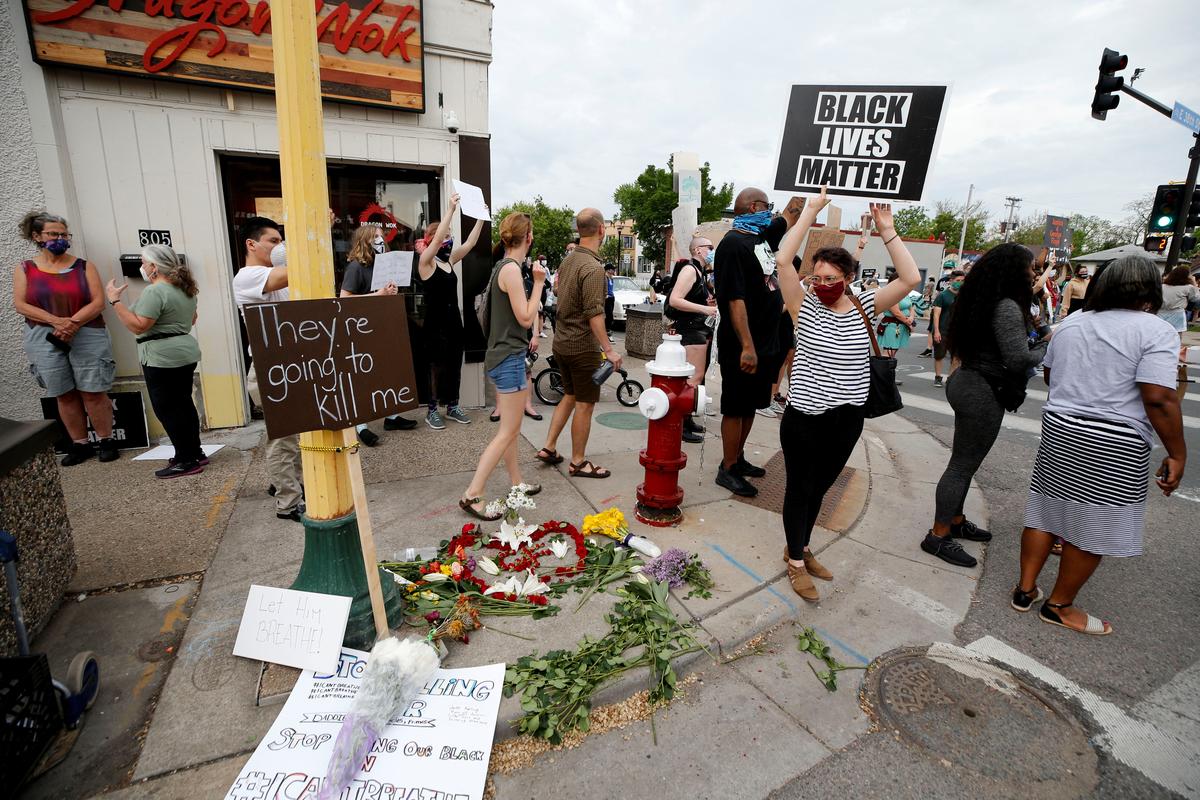 FILE PHOTO: Protesters gather at the scene where George Floyd, an unarmed black man, was pinned down by a police officer kneeling on his neck before later dying in hospital in Minneapolis, Minnesota, U.S. May 26, 2020. REUTERS/Eric Miller/File Photo

(Reuters) – The U.S. Department of Justice said on Thursday it had made its investigation into police involvement in the death of George Floyd a “top priority,” after a second day of protests in Minneapolis over the unarmed black man’s death.

Experienced prosecutors and investigators from the Federal Bureau of Investigation had been assigned as part of a “robust” probe into whether the police officers involved had violated federal laws, the department said in a statement.

The statement followed a second day of protests in Minneapolis triggered by rage over the death of Floyd, a black man who was seen in a widely circulated video gasping for breath as a white officer knelt on his neck.

Floyd, 46, died on Monday. The investigation will be carried out by the U.S. Attorney’s Office for the District of Minnesota, the Justice Department’s civil rights division and the FBI’s Minneapolis Field Office.

The widely circulated video of Floyd’s fatal encounter on Monday night with the police, taken by a bystander, showed him lying face down and handcuffed, groaning for help and repeatedly saying, “please, I can’t breathe,” before becoming motionless.

A second day of demonstrations, accompanied by looting and vandalism, began on Wednesday hours after Minneapolis Mayor Jacob Frey urged prosecutors to file criminal charges against the white policeman shown pinning Floyd to the street.

The victim’s brother Philonise Floyd told CNN on Thursday that he was “tired of seeing black men die” and understood people’s anger but urged protesters to be peaceful.

“To the police, I want them to get everything right, start doing your job the right way because I haven’t been seeing it,” Floyd said.

Reporting by Nathan Layne in Wilton, Connecticut and Maria Caspani in New York; Editing by Gareth Jones and Bernadette Baum

Omega Launches Stunning 60th Anniversary James Bond Watch
Parliament to introduce bill extending deadline for forming Northern Ireland executive
Sam Bankman-Fried tries to broker FTX bailout from his home in the Bahamas, despite being booted from the crypto company
Furiosa’s Anya Taylor-Joy Talks Stunt Driving Without A License (Just Don’t Ask Her To Parallel Park)
How To Find a Hobby That Fits Your Personality