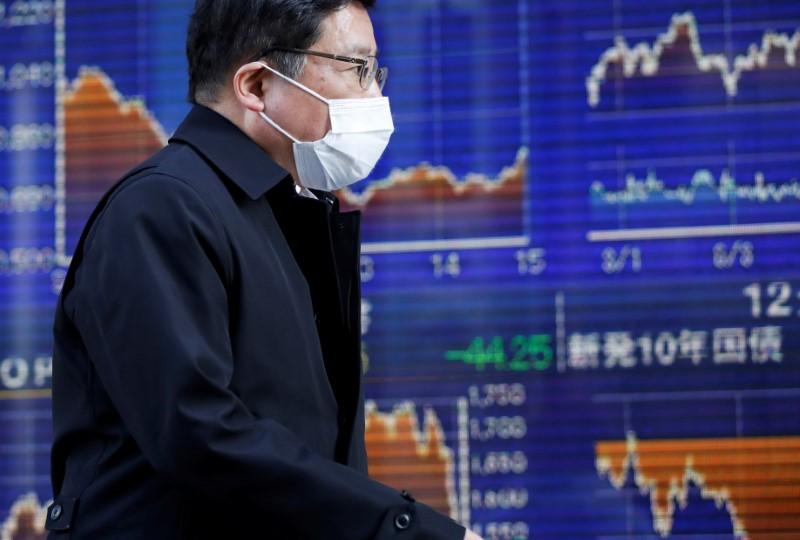 SYDNEY (Reuters) – Asian shares pushed to three-month highs on Monday as progress on opening up economies helped offset jitters over riots in U.S. cities and unease over Washington’s power struggle with Beijing.

FILE PHOTO: A passerby wearing a protective face mask, following an outbreak of the coronavirus, walks past an electronic board showing the graphs of the recent movements of Japan’s Nikkei share average outside a brokerage in Tokyo, Japan March 6, 2020. REUTERS/Issei Kato

E-Mini futures for the S&P 500 recovered early losses to be up 0.1%, having been down 1% in early trade, while safe-haven gold pared an early rise to be up 0.4% at $1,733 an ounce. Bonds also lost early gains and oil prices slipped.

After a cautious start Asian markets were led higher by China on signs parts of the domestic economy were picking up. Hong Kong .HSI managed to rally 2.8%, while Chinese blue chips .CSI300 put on 1.4%.

An official business survey from China showed its factory activity grew at a slower pace in May but momentum in the services and construction sectors quickened.

A private survey showed a return to growth in May, though exports remained depressed.

The resilience was notable given major U.S. cities were cleaning up streets strewn with broken glass and burned out cars as curfews failed to stop confrontations between activists and law enforcement.

Protesters have taken to the streets after weeks of lockdowns during the coronavirus pandemic that threw millions out of work and hit minority communities especially hard.

The turmoil was a fresh setback for the economy which was only just emerging from a downturn akin to the Great Depression. Following poor data on spending and trade out on Friday, the Atlanta Federal Reserve estimated economic output could drop a staggering 51% annualised in the second quarter.

The May jobs report due out on Friday is forecast to show the unemployment rate surged to 19.8%, smashing April’s record 14.7%. Payrolls are expected to drop by 7.4 million, on top of the 20.5 million jobs lost the previous month.

“Current unemployment numbers go far beyond what has been experienced in any post-war recession,” wrote Barclays economist Christian Keller in a note.

“To the extent that some sectors may never return to pre-pandemic business-as-usual, labour faces a substantial challenge to reallocate workers,” he added. “Such a process could be a matter of years rather than months or quarters and in the meantime it would weigh on consumer demand.”

Bond investors suspect economies will need massive amounts of central bank support long after they reopen and that is keeping yields super low even as governments borrow much more.

Yields on U.S. 10-year notes were trading steady at 0.66% having recovered from a blip up to 0.74% last month when the market absorbed a tidal wave of new issuance.

The decline in U.S. yields has been a burden for the dollar, but the world’s reserve currency also tends to benefit from safe-haven status to limit the losses.

Much of the dollar’s recent decline has come against the euro which has been broadly boosted by plans for an EU stimulus package. The single currency was last up at $1.1131 EUR=, after climbing 1.8% last week.

Markets are awaiting a meeting of the European Central Bank on Thursday where it is widely expected to raise its asset buying by around 500 billion euros to 1.25 trillion.

In commodity markets, oil prices eased on worries about U.S. demand, but found some support from reports Russia had no objection to the next meeting of OPEC and its allies, known as OPEC+, being brought forward to June 4 from the following week.