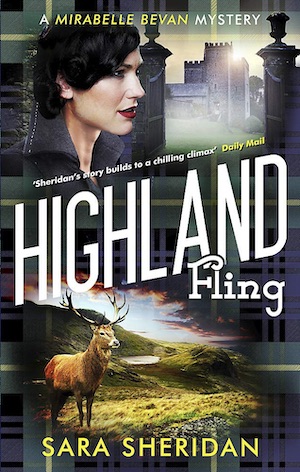 1950s Scotland is our first destination this week, as our On the Radar column rounds up the latest new crime releases. Sara Sheridan’s latest promises an intriguing mystery which is softly toned and as such is a good break from a world full of tension and grief. But if harder crime is your thing, we’ve also got a serial killer, police procedurals, gangs and, well, injustice in the good old US of A. Fictional, this time, fortunately.

The latest instalment in Sara Sheridan‘s popular series of historical crime mysteries featuring Mirabelle Bevan is out now, and finds her on her hols in the Highlands of Scotland. It is 1958 and she is a guest of Supt Alan Robertson and his family and is impressed with their home and their hospitality. But soon the cocktails are on hold when the body of an American fashion buyer turns up brutally murdered, sending shockwaves around the close rural community – and Mirabelle can’t resist giving full rein to her sleuthing skills. It’s about to get her into hot water…
Buy now on Amazon

The Dentist by Tim Sullivan

UK screenwriter Tim Sullivan’s debut crime novel is a police procedural, out on 15 June and set in Bristol. It opens in dramatic fashion, when the body of a homeless man is found on the Downs in the shadow of the Clifton suspension bridge. He’s been strangled, and thus begins the search for his killer. Early indications are that he was murdered by another homeless person, which makes it a low priority case, but DS George Cross isn’t so sure.  An outsider himself, he is drawn to cases of the dispossessed and social outcasts. Can he prove his theory correct and give the victim a voice they didn’t have in life?
Pre-order now on Amazon

In the Know by Dougie Brimson

If you want to find out about British gang culture and football hooliganism, author Dougie Brimson is a man in the know. His screenplay about a football firm became the film Green Street, and his gangland novels The Crew and Top Dog have sold over 400,000 copies each. In the Know is third in the Billy Evans series and after 10 years out of the game, tragedy has struck. Billy sets out for revenge and his sense of power and love of violence are soon reinvigorated. With the backdrop of Brexit and growing right-wing aggression, he soon starts sniffing out new opportunities for organised crime in London. If you want Brit Grit, this is it. Out now.
Buy now on Amazon

The Patient Man by Joy Ellis

DI Rowan Jackman and DS Marie Evans of Fenland Constabulary are back on 18 June, and this time Joy Ellis’s doughty partners in crime fighting are haunted by something that happened in the past. Serial killer Alistair Ashcroft is newly out of jail and intent on getting his revenge on the people who put him there… His opening gambit is to send a sinister text to Evans, but as his behaviour escalates, putting the police on high alert, Ashcroft is nowhere to be found. He’s playing a waiting game, and it could prove fatal.
Pre-order now on Amazon

Occam’s Razor is the principle that the simplest explanation is usually the correct one. But this is crime fiction and with this novel set in Miami, Florida, author Joe Clifford has lobbed a complex long bomb in the direction of his protagonist, former NFL prospect Jackson Reyes. Now working for security for a sports network, his boss has called him to Miami asking him to exonerate her son – who was convicted of raping and murdering one of her granddaughters. What looked like an open-and-shut case against Rodney Dupree is anything but that once Jackson gets hold of files about the crime. Things could get sticky for some rich and powerful people down in South Florida. Out 15 June.
Pre-order now on Amazon