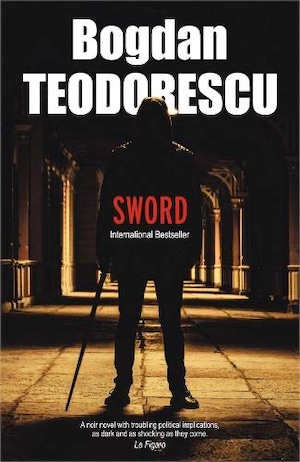 Translated by Marina Sofia — Crime fiction is the world’s favourite literary genre, and the most international. For the English-speaking reader there is literally a cultural mosaic of work to enjoy – German, French, Scandinavian, Latin American, Japanese, Korean… you name it. One country that hasn’t stepped out onto the global stage all that much just yet is Romania. The newly established Corylus Books aims to rectify this by translating Romanian authors, as well as writers from other countries around the world.

First up is Sword, a Romanian bestseller which provides insight into the dark underbelly of Bucharest’s criminal world and its equally corrupt government. Even though it’s fictional, there’s no doubt that Sword has Romania’s tumultuous political past, and possibly also the present, as its base. Author Bogdan Teodorescu has worked as a journalist and was the Acting Minister in the country’s Department of Public Information between 1996 and 1997. The experience directly contributed to him writing Sword.

Before 1989, Romanians suffered severely under Nicolae Ceauşescu’s 25-year dictatorship. Sword shows that perhaps the country is still struggling with the same issues now as it did then. There is corruption in public office and poverty in the population. And, in this story, a serial killer is roaming the streets of Bucharest, spreading fear among its inhabitants. Dressed in a trench coat, he brutally cuts his victims’ throats with a sword or dagger. Apart from their violent deaths, the victims have two things in common: they are Roma gypsies and they have criminal records. The press instantly brands the gypsy killer ‘Sword’ and, with the murders sensationalised in the media but little focus on the human rights angle, the situation rapidly escalates.

As the body count increases the victims become mere statistics used for political leverage. Each murder turns into an opportunity to make a political statement. Journalists are either pawns or accomplices bribed by opposing political parties to alter the media’s narrative to further their agendas. Journalists Victor, Mircia, Carstea and Marius Ionesco are all reporters from different newspapers who are used by the Romanian State to improve their image – some more successfully than others.

Despite mounting pressure the police prove unsuccessful in finding the killer. Their inability to solve the crime turns into an embarrassment and the corruption within their ranks only exacerbates the situation. Some of the best policemen are recruited by criminal gangs and even judges and prosecutors won’t convict criminals as they are being bribed. They are accused of racial bias and dragging their heels since the case would’ve been solved had the victims been Romanians or Hungarians.

During the raid of a gang member’s house, a nine-year-old child is killed and the simmering kindle ignites. Violent clashes between the police force and the Roma in Constanta follow and when a policeman dies his family takes revenge. Riots spread throughout the country and trigger incidents of xenophobia.

The government denies any inter-ethnic conflict, proclaiming that the population of Romania are very tolerant people who love each other. Despite the president’s desperate attempts to position himself internationally as a protector of ethnic minorities, his failure to prevent an impending civil war and catch a killer only proves that he is incompetent, indecisive and losing grip on his position of power.

To further fuel racial tensions some Romanians welcome the Sword’s killings and sees it as an ethnic cleansing, ridding the country of criminals. Another death, another criminal gypsy less. The common perception exists that gypsies are too lazy to work and are involved in criminal activities throughout Europe. The vigilante killer is merely doing what the government and police fail dismally at.

Sword has an unsolved crime at its core. A sword-wielding vigilante is ridding the city of criminals and gypsies, but we never find out what his motive is. It doesn’t deliver a clean-cut conclusion with satisfactory answers. The crime is merely a backdrop to highlight the corruption in a country still attempting to recover from decades of abuse by its leaders. Simultaneously it demonstrates the complicated nature of a society divided by class and race.

Over 30 characters appear in Sword. Most are politicians, members of the police or journalists. Unfortunately, they appear as faceless players in the political game, and many have fleeting roles in the story. With little character development it’s difficult to warm to them and engage with the story. The main character is The President and he is only mentioned by title. Unlike the crime fiction you’re probably used to, there’s no obvious protagonist driving the murder investigation – only Stoicescu, head of head of intelligence, and Captain Dulgheru, commander of the SWAT team, are mentioned.

It turns out that the most interesting characters are those on the fringes of the story. With names like Nelu the Fly; Fane the Slut; Bean; Klaxon and Beetle one can’t help but be intrigued. Almost a page is used to describe a beggar street woman, Maria, who was connected to one of the victims. Maybe Teodorescu intentionally focused on these characters to create contrast between them and those in power.

Teodorescu’s bestseller is a realistic, harsh and unsettling reminder that unfair and unethical criminal behaviour is still prevalent in many countries and there aren’t easy solutions. Sword lacks the momentum and suspense of a crime thriller and the large blocks of dialogue makes it a challenging read. As socio-political commentary it succeeds, but it doesn’t quite hit the mark as a crime novel.

Conspiracy theorist Alex Jones ordered to pay another $45m to parents of Sandy Hook victim
The Length of Earth’s Days Has Been Mysteriously Increasing, and Scientists Don’t Know Why
From Haute Couture to Haute Cuisine
South Carolina Senator Demands Book Removal; Threatens Public Library Jobs and Funding
A Lady for a Duke