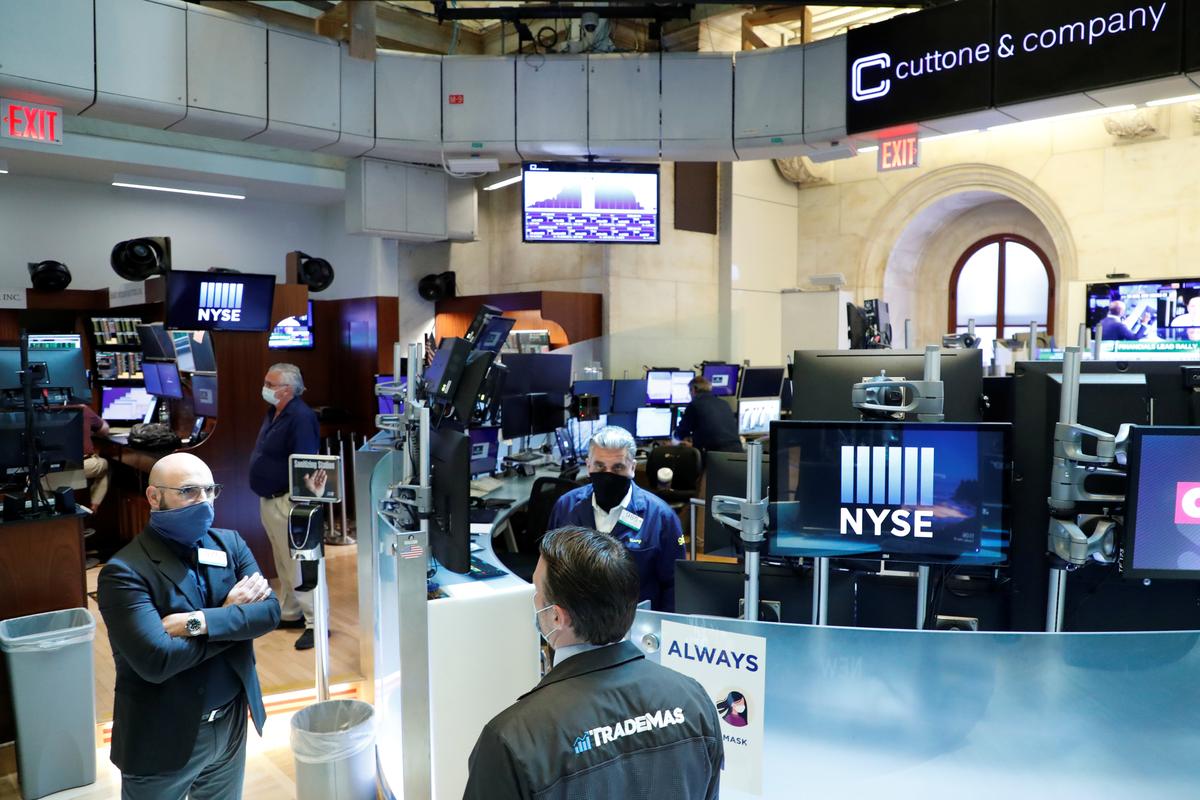 (Reuters) – Wall Street’s S&P 500 and Dow Jones indexes fell on Tuesday while the tech-heavy Nasdaq hit a record high for the third straight session as investors eyed this week’s Federal Reserve meeting for signs on how it views a restarting economy.

FILE PHOTO: Traders wearing masks work, on the first day of in person trading since the closure during the outbreak of the coronavirus disease (COVID-19) on the floor at the New York Stock Exchange (NYSE) in New York, U.S., May 26, 2020. REUTERS/Brendan McDermid

The Nasdaq became the first of Wall Street’s main indexes to confirm a new bull market after hitting a low on March 23. The rally in U.S. stocks accelerated last week after strikingly upbeat May jobs data strengthened views the worst of the economic fallout from the pandemic was over.

The benchmark S&P 500 is about 5% below its own all-time high, having climbed nearly 46% since its pandemic low on March 23.

“We’ve gone really far in a short period of time. I would not be surprised to see the market sort of trend sideways within the next week or two,” said Tim Chubb, chief investment officer at Girard in West Chester, Pennsylvania.

While no major policy announcements are expected when the U.S. central bank wraps up its two-day meeting on Wednesday, investors will keep a close watch on its remarks on the health of the economy.

The benchmark U.S. yield curve – an indicator of economic expansion – has widened to its steepest level since March as U.S. data improved. Investors will also keep an eye out on whether the Fed will step in to flatten the yield curve.

“Everyone will really be looking for the Fed’s continued commitment to support financial markets as well as the economy with low interest rates and stimulus. And what they plan on doing with the size of the balance sheet,” Girard’s Chubb said.

Nine of the 11 S&P sectors were in the red with interest-rate sensitive financials weighing the most on the benchmark index. Technology and communication services stocks, which had lost ground recently, climbed higher on Monday.

In a bright spot, Tiffany & Co edged 2.1% higher as the luxury jeweler said it had amended certain of its debt agreements in order to have sufficient liquidity to navigate the virus outbreak as it posted a 43% slump in quarterly sales.

Reporting by Medha Singh and Devik Jain in Bengaluru; Editing by Uttaresh.V and Shounak Dasgupta