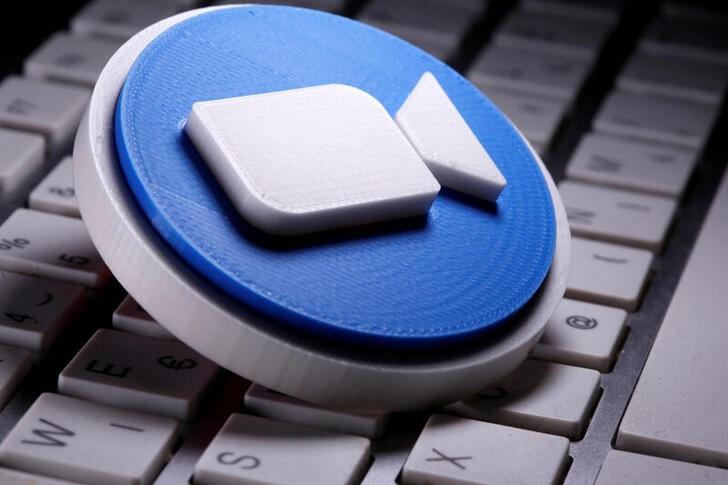 SHANGHAI (Reuters) – Zoom Video Communications temporarily shut the account belonging to a group of U.S.-based Chinese activists after they held an event to commemorate the 31st anniversary of China’s Tiananmen Square crackdown, the activists said on Thursday.

FILE PHOTO: A 3D printed Zoom logo is placed on the keyboard in this illustration taken April 12, 2020. REUTERS/Dado Ruvic/Illustration

Humanitarian China said the event they held on May 31 was hosted by a paid account and was joined by over 250 people worldwide via video-conferencing platform Zoom, while more than 4,000 streamed it on social media, many of whom were from China. The account was shut on June 7, they said in a statement.

Zoom confirmed the U.S.-based account had been suspended but had now been reactivated.

“When a meeting is held across different countries, the participants within those countries are required to comply with their respective local laws,” it said in an e-mailed statement.

“We aim to limit the actions we take to those necessary to comply with local law and continuously review and improve our process on these matters.”

The anniversary of China’s bloody crackdown on pro-democracy protests at Tiananmen Square is a highly sensitive matter in China and content related to it is regularly blocked or censored by authorities.

Humanitarian China founder Zhou Fengsuo said on his Twitter account that the group had yet to receive an answer from Zoom about why its account was closed.

The group said in a statement that Zoom was essential for reaching Chinese audiences “remembering and commemorating Tiananmen Massacre during the coronavirus pandemic”.

California-based Zoom has said it is working to fix flaws in the security of its platform as user numbers soar with the imposition of lockdowns and social distancing restrictions around the world.

Some schools and businesses have already stopped using Zoom over privacy concerns, among them Elon Musk’s rocket company SpaceX.

Toronto-based internet watchdog Citizen Lab said in April that it had found evidence some calls made in North America, as well as the encryption keys used to secure those calls, were routed through China. Zoom said it had mistakenly allowed Chinese data centres to accept calls.

Last month, Zoom said it was suspending free user registrations in China, which analysts said was targeted at reducing the company’s exposure to China. [nL4N2D13EQ]