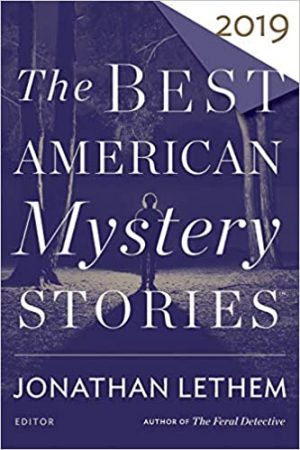 Edited by Jonathan Lethem — The list of guest editors for this long-running series goes back to Robert B Parker in 1997. This year’s editor, Jonathan Lethem is not strictly a crime and mystery writer, but a literary novelist. Yet his entertaining 2019 book The Feral Detective put a stake firmly into crime fiction territory. He considers crime writing and reading a form of ‘deep species gossip.’

For reasons that will become clear in a moment, it’s useful to think about how such a volume is compiled. The series editor reads the major specialty magazines, a multitude of crime and mystery anthologies, and the stories that occasionally surface in literary and other magazines or are submitted by their authors, post-publication. In sum, literally thousands of stories are in the big pool.

They’re read by the team of Otto Penzler and his colleague, Michele Slung. Slung takes the first pass, and Penzler, the series editor, whittles the list down to 50. These are then sent to the guest editor to choose the 20 best, with the remaining 30 listed in an ‘other distinguished mystery stories’ appendix. There are always many fine stories in this collection, but you can envision the political minefield when appending the word ‘best.’

I remember reading several of them earlier in the year in Ellery Queen Mystery Magazine and elsewhere. Open House is one of those, a real charmer by Reed Johnson. My favourites include:

Still, the whole package doesn’t add up to the best in such a very crowded field. A couple of the stories are much too long for what they deliver; one I couldn’t finish at all, and several are so obvious in direction that they lose the ‘mystery’ aspect entirely.

The US crime and mystery writing world was shocked to learn that the publisher plans to revamp this series, removing Penzler after 22 years. The reason given, as Penzler suggested on Facebook, was that HMH wants to diversify the voices represented in the volume. Our review of last year’s volume noted the paucity of female writers – two out of 20.

The ensuing online debate followed painfully predictable lines, with Penzler’s defenders and detractors speaking out. No one asked me, but I’m all in favour of any moves that will expand the audience for crime and mystery fiction. Maybe an infusion of new blood will be a good thing. However, unless a parallel effort is made to increase diversity in the pool itself, what drips out may not change much.

If you like crime short stories, discover many, many more here.