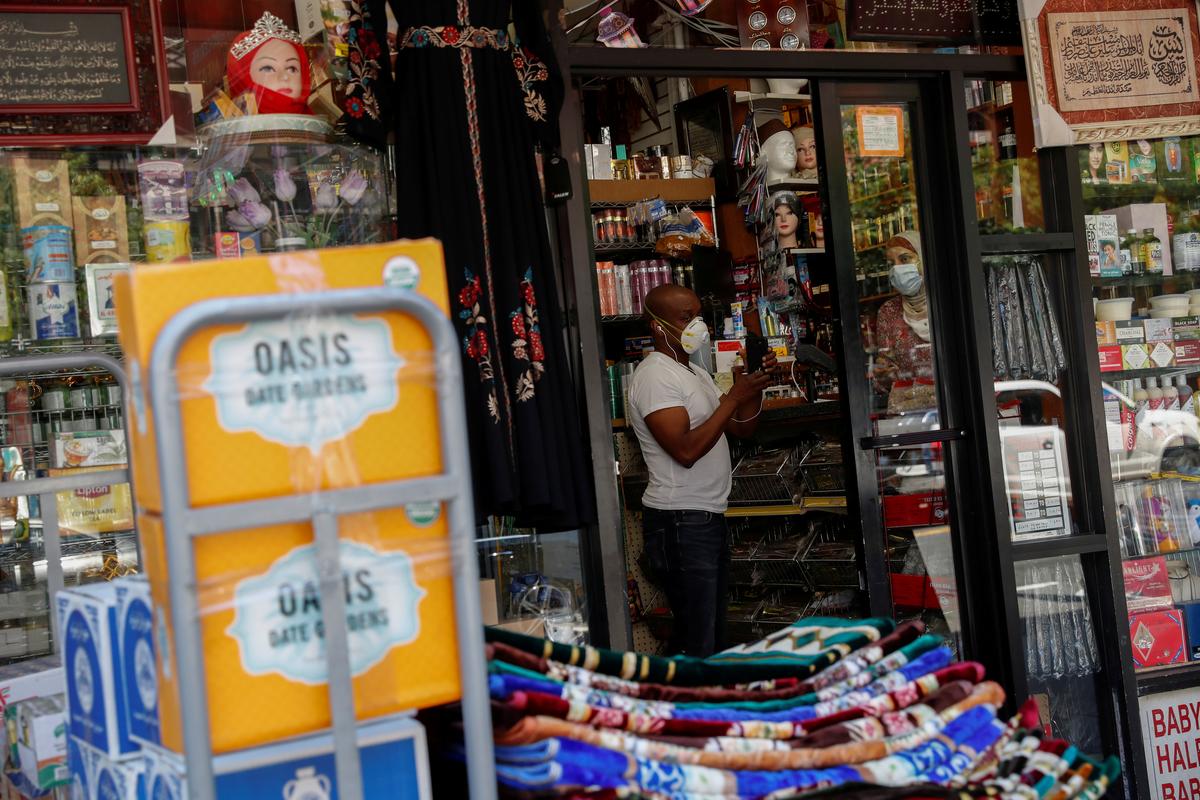 (Reuters) – U.S. retail sales likely experienced a record rise in May as 2.5 million Americans went back to work, although any rebound will retrace only a fraction of the historic drops in March and April amid the coronavirus lockdowns.

FILE PHOTO: A shopkeeper works inside his retail store as the phase one reopening of New York City continues during the outbreak of the coronavirus disease (COVID-19) in the Brooklyn borough of New York City, New York, U.S. June 9, 2020. REUTERS/Shannon Stapleton

The monthly report, due to be released by the Commerce Department on Tuesday, is expected to show overall receipts at U.S. retailers jumped 8.0% last month, according to a Reuters poll of economists. That would exceed the previous record increase of 6.7% in October 2001 as Americans resumed spending following what was then a record pullback in the aftermath of the September 11, 2001, attacks on the United States.

While certainly an eye-catching bounce, it would retrace only about a quarter of the sales drop registered in the record back-to-back declines in the two previous months when widespread stay-at-home orders were imposed to stop the spread of COVID-19, the respiratory illness caused by the novel coronavirus. Sales in April fell 16.4% after tumbling 8.3% in March.

The U.S. economy dropped into recession in February as the viral outbreak brought a record-long expansion to an abrupt end. Employment fell by about 22 million in March and April, but payrolls rose unexpectedly in May by just over 2.5 million, supporting the thesis that consumer spending may be recovering and that the worst of the downturn may have passed.

“Given the bounce in job growth in May and the fact that some state economies started to re-open in the second half of the month, it’s reasonable to expect that spending partially rebounded in May,” NatWest economists Michelle Girard and Kevin Cummins wrote in a note to clients.

The likely sales rebound was probably led by strong auto sales as the relaxing of lockdowns across the country allowed car dealership showrooms to reopen. May’s sales rate climbed above 12 million vehicles per year after dropping below 9 million in April, according to Wards Intelligence.

The closely watched “retail control” figure, which further backs out building materials and food services in addition to excluding gas and automotive-related sales and most closely tracks the consumer spending component of gross domestic product, is expected to have risen 4.7%, according to the Reuters poll. That, too, would be the largest increase since the government began tracking it in 1992.

“For what it’s worth, chain store reports for May suggested some hints of a turnaround,” the NatWest economists said, citing commentary from the weekly Johnson Redbook retail sales report that pointed to a pick-up in seasonal merchandise as more states reopened and the weather warmed.