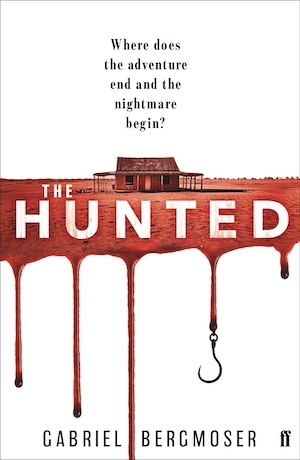 From Arctic snowscapes to deep, dark forests and on to the heat of the Outback, wilderness noir is getting to be quite the thing. If it’s grabbed you then watch out for our lead book this week – The Hunted by Gabriel Bergmoser is set in a remote part of Australia and needless to say things get pretty desperate pretty fast once the bad guys turn up. Apart from this debut, we’ve got plenty to choose from including the latest by Karen Dionne and Julia Heaberlin.

The Hunted by Gabriel Bergmoser

This much in demand crime debut by Australian author Gabriel Bergmoser brings with it a touch of horror and a whole lot of tension. First there is Allie, who heads into the Outback to stay with her grandfather, Frank, owner of a service station on a remote highway. Then there’s Simon, the wanderer, lover of the open road, and Maggie, someone who’s also on a journey and who will bring them all together. She is the main protagonist. Dark deeds will happen out there in the dust, with characters being hunted down Deliverance-style. The author has won awards writing for theatre and The Hunted has already been optioned for film. Out 6 August.
Pre-order now on Amazon

After Una’s mother dies, she wants a fresh start and a change of scenery. So, she accepts a job working for Mrs Elspeth McKenzie, an elderly lady with a nice home who needs a carer and companion. It should be perfect, but this is a crime thriller and onto the scene comes Elspeth’s daughter, Kathryn. She starts to make it clear that she doesn’t want Una around. Then Una starts to suspect that there have been other girls there before her… girls who went missing without trace. Watch for Just Like the Other Girls on 6 August.
Pre-order now on Amazon

The Wicked Sister by Karen Dionne

It’s not pantomime season yet, is it? The title of this book certainly makes us want to shout, “She’s behind you!” though. Forget fairy tales and jump into the present, as Rachel Cunningham leaves her self-imposed exile in a psychiatric facility. She’s spent 15 years convinced that she killed her parents, but when she returns to Michigan and the scene of the crime, things began to fall into place. What really happened that day? And do the tight bonds she shares with her sister hide an unspeakable truth? Karen Dionne’s new psychological thriller is out on 4 August. Also, see our review of her wilderness noir novel The Marsh King’s Daughter here.
Pre-order now on Amazon

Historical crime is really hitting the spot right now, and we travel back to the 1930s for the latest instalment of Rhys Bowen’s Her Royal Spyness series. Lady Georgiana Rannoch is just home from honeymoon with her dashing new husband, Darcy O’Mara, when her best friend Belinda asks for a favour. She’s just inherited a house in Cornwall, so will Georgie go with her to take a look at it? A straightforward visit becomes complicated when the pair are obliged to stay with a childhood friend of Belinda’s. Rose was always a little odd, and now she’s convinced that her husband killed his first wife… This twisted gothic tale of betrayal, deception and murder is out on 4 August.
Pre-order now on Amazon

We Are All the Same in the Dark by Julia Heaberlin

The author of the best-selling psychological thrillers Black Eyed Susans and Paper Ghosts is back with another engrossing standalone, out 6 August. It was 10 years ago that Trumanell Branson disappeared, leaving behind nothing but a bloody handprint. Her brother Wyatt has never given up hope of finding his sister and when he discovers a lost girl, he believes she is a sign. Local cop Odette Tucker isn’t so sure, but she sets her doubts aside and endeavours to solve both cases. As Odette fights to save a lost girl in the present, her investigations only serve to dig up a shocking truth about that fateful night in the past.
Pre-order now on Amazon