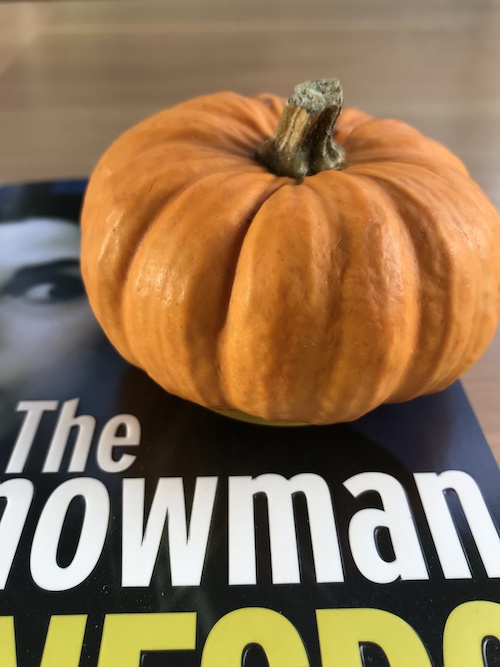 Why do we love crime fiction? Maybe one of the reasons is that it’s the genre where the monsters seem real – well, they don’t rely on magic, spells or supernatural powers to carry out their work. Usually it’s very human stuff. Or inhuman, in many cases. But we usually understand what they’re doing and why, even if it’s because of madness, and that’s what makes crime fiction so compelling. However, every once in a while a writer comes along and stretches that illusion of reality. Halloween is the best time of year to tread the line between terrifying characters in the real world, and ones that maybe belong somewhere just outside of our reality. The trick is getting it right, and when authors do, it’s a treat…

The Snowman by Jo Nesbo

The Snowman might just be the best novel in the Harry Hole series, and it’s almost certainly the scariest. In it, the Oslo detective is tracking down a deranged serial killer who uses a snowman as a calling card and who likes to decapitate their victims. The atmosphere is more wintry than autumnal, but it’s chilling through and through. Harry, as you know, has a problem avoiding winter warmers and spends part of the novel stupefyingly drunk as he, his ex-girlfriend Rakel and his colleague Katrine Bratt all become targets for the killer. In one gripping chapter, Harry even loses one of his extremities, but we won’t tell you which… The Snowman was made into a motion picture, but in this case we definitely recommend the book.
Buy now on Amazon

Chris Carter has cornered the market in grisly crime novels, and Hunting Evil is a prime example of his deadly and disturbing oeuvre. The series features Robert Hunter, head of the LAPD’s Ultra Violent Crimes Unit, and in this one he comes up against an old adversary – mass murderer Lucien Folter – described as ‘evil in human form’. Yes, there’s plenty of gore and some darker than dark moments, but amid the unremitting gloom there are flashes of humour that give you the chance to catch your breath. Carter studied psychology and criminal behaviour at the University of Michigan and then went on to interview many criminals, including serial killers, as a member of the State DA’s criminal psychology team, so he really knows about evil and how to portray it. A book to read with ALL the lights on. Our review is here.
Buy now on Amazon

Close your eyes and picture the very darkest corner of the human soul. Then imagine you’re there and you turn off the lights. Every chapter in Will Carver’s Hinton Hollow Death Trip resembles the light switch you turned and without respite this is a book that gets blacker and blacker and blacker still. Evil has arrived in Hinton Hollow and his whispers are corrupting the people there. Or perhaps they’ve already been corrupted and this is the tipping point. Little sins and betrayals are followed by brutal murders – even innocent children are victims – and nobody knows who’s behind them or why. DS Pace, whose past has left a black void inside him, is Evil’s target. Can he redeem himself? Can any of us? This is such a clever, innovative and, yes, very disturbing read. Perfect for Halloween. We reviewed Hinton Hollow Death Trip in 2020.
Buy now on Amazon

The Only Good Indians by Stephen Graham Jones

Who knew that when four Indian men killed a pregnant elk in their youth that it would haunt them the rest of their days? That’s where the horror vibe comes from in this superb – and very different – crime novel by Stephen Graham Jones. The elk becomes a metaphor for guilt, and a symbol of revenge as life gets strange for these men decades later. One is killed after a freak elk stampede outside a roadhouse in North Dakota. Another has terrifying visions. The shape-shifting elk-mother manifests as a basketball player and visits the daughter of a third member of the gang. First Nations folklore, tradition and spiritualism are woven into this valuable addition to the crime genre, which will also freak you out. Read our review of the audiobook here.
Buy now on Amazon

Meet a serial killer who will make your skin crawl. He’s the Bone Collector and he does exactly that – focusing upon the skeletons of people with deformities. He is an evil, smelly, psychopath who manages to live under the radar – and how he procures his bones will set the guts a’churning. On his tail is DS Etta Fitzroy, a flawed and troubled officer who at first glance appears no match for the odious murderer, but as we get to know them both the balance shifts in this brilliant debut novel that will haunt you well after the final page is turned. It is perfect Halloween fodder, a book that really twists the thumb screws as the pace quickens and all manner of nasty things happen. Expected the unexpected – that’s all we’re saying… You can read our 2017 review of Rattle here.
Buy now on Amazon

The Book of Lamps and Banners by Elizabeth Hand

Elizabeth Hand writes superb crime fiction that always draws you right into the atmosphere, hazy and befuddled as it is by the copious amount of narcotics and alcohol imbibed by her heroine, Cass Neary. The Book of Lamps and Banners of the title is a tome of ancient knowledge. It’s got an almost magical visual code in it that taps right into our inherited psyche, apparently. Cass clatters sideways into a deadly plot to steal the book, but misses the chance to stop the perpetrator because she’s having sex with someone in a cupboard. However, she’s game for recovering this handmade artefact and recruits her old flame Quinn to help. Things go from weird to sickening to downright lethal when they end up on an isolated Swedish island, tracking down a white supremacist who makes bizarre religious relics from bones – both animal and human. When it comes to twisted macabre, Elizabeth Hand’s imagination knows no bounds. There’s more in our full review.
Buy now on Amazon

Revenge is the over-riding driver in this contemporary pulp novel by a former policeman and social worker. The story is told by Alice Granger, a young woman who takes revenge on her paedophile father by pushing him off a cliff. Although she was hoping this would release the family from his spell, far from it… he still controls them to some extent, even Alice herself. So after completing school and leaving home, she becomes an avenging angel for others like her and begins a murder spree by entrapping and then killing other paedophiles, using online platforms. This is a visceral, brutal and crazy read as you keep turning the pages to find out just how far Alice will go. Here’s our review.
Buy now on Amazon

Afraid of the Shadows: An Anthology of Crime Stories

Here’s a selection of entertaining reading for anyone who loves crime fiction and wants to dip in and out. Each of the 19 short stories included has a Halloween twist, and children are often a theme in different ways – after all, proceeds from sales will go to the children’s charity Barnardo’s. Edited by Miranda Jewess, it includes work by a range of top British and Irish crime writers such as Peter James, Victoria Selman, MW Craven and Jo Furniss. People love the idea that they can get away with a little revenge when they’re dressed up in a Halloween costume… but when the strings are being pulled by a crime fiction author, they’d better think again. Read our full review here.
Buy now on Amazon

That three-legged Isle of Man symbol we used to see on the 50 pence piece is enough to weird anyone out, but Chris Ewan’s Dark Tides will really give you the creeps on Halloween. Or Hop-tu-naa as it’s called on the Isle of Man, where the book is set. The book opens with its antagonist, Claire, apparently being stalked by a killer in a creaky old building. As the story unfolds, we find out why and it all goes back to a mean Hop-tu-naa prank pulled by Claire and five of her friends back when they were teenagers. But that night turned out to be a traumatic one for Claire – because it was the same night her mother disappeared. We reviewed this book back in 2014 and it’s still one of the best Halloween stories crime fiction has to offer.
Buy now on Amazon

No cuddly little toy with button eyes and wool strand hair, this. No, the Ragdoll of the title is a strange marriage of six different bodies, discovered in a flat opposite the home of London police detective William Oliver Layton-Fawkes, known as Wolf to friends and colleagues. The killer has an agenda, and Wolf figures in it. Can he work it all out before he becomes a victim too? Daniel Cole’s debut novel is a masterclass in plotting, keeping the reader wrong footed at every end and turn. It is a dark and darkly disturbing read, which hooks you in and doesn’t let go. Wolf is a haunted man, and you’re destined to be haunted by this book – so be sure to set aside some reading time amid the trick or treating this year, you won’t regret it! Our review was published in 2017 and you can read it here.
Buy now on Amazon

Chasing the Boogeyman by Richard Chizmar

This is one of those novels where the author is a character in the story. Richard Chizmar takes us back to 1988, when his younger self had just finished college. He’s back in his home town when the murders start taking place. The first victim is the younger sister of a guy Richard went to school with, and it shatters the safe and homely vibe the town has built up over the years. Four more girls are taken and murdered, in what looks like a ritual form of killing, and Richard takes up with a local reporter to try to investigate the Boogeyman murders. Meanwhile, the townsfolk themselves are turning on one another. This book has the sound of, and feels like, a Stephen King novel and, indeed, the author has collaborated with King in the past. For more details, check out our review.
Buy now on Amazon

Children of Chicago by Cynthia Pelayo

Crime thriller and horror come together in this creepy read about troubled rookie detective Lauren Medina, who’s working on the shooting of three teens by Humboldt Lake in Chicago. One of them lies dead, two are in hospital, and the only other kid who might know what happened is too spooked to talk. Pressure in the job, grief and a terrifying temper all hamper Lauren, but wider than that, the murders may be connected to myths, fantasies and fairytales that have built up over the years among the kids – and some grownups too – in Chicago’s neighbourhoods. Foul whispers are on the air in the Windy City… You’ll find our full review here.
Buy now on Amazon

Tell us your favourite crime and horror crossovers in the Comments below. Also see our earlier Halloween recommendations in 2015 here and in 2013 here.