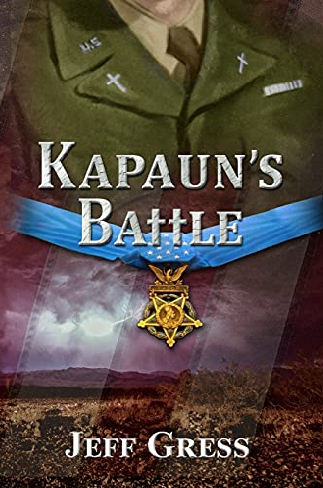 (Houston, TX/Wales, U.K.) Kapaun’s Battle, by Jeff Gress, has hit # 1 on Ingram in the genre of History, Wars &; Conflicts, and Korean War and is already an Amazon Best Seller. Ingram is the largest book distributor in the world, going out to Bookstores, Libraries, and museums.

Capt. (Father) Emil J. Kapaun, from Kansas, is the most decorated Chaplain in U.S. Army history receiving the Congressional Medal of Honor (Posthumously) from President Barack Obama 70 years after his death in N. Korea. He is also going through the process of Canonization (Sainthood) in the Catholic Church.

The book and soon-to-be film is a biopic look at Capt. (Father) Emil J. Kapaun’s heroic, selfless story while he served in the Korean War as an Army Chaplain in the 1 st Calvary Division. Kapaun laid down his life for his fellow POWs while in captivity in a brutal Chinese POW camp in N. Korea after being tortured to the point of death. As his captors led him off to the Death Hut, Father Kapaun blessed his captors saying, “Father forgive them for they know not what they
do.”

3 rd Coast Publisher, Ron Mumford, who is a Vietnam combat veteran said, “I have seen bravery on the battlefield, however, for someone who never fired a shot and was a servant to his men right up until death, Capt. (Father) Emil J. Kapaun will always be my first and foremost memory of a true hero!”

Executive Producer Keith Barrows, 360 Studios, said, “This is a story that must be seen on film so the audience can experience and see the price of freedom we have here in the United States. It is another true story of the brave men and women who have never fired a shot and received numerous medals of valor, many, like Capt. (Father) Emil J. Kapaun.

3 rd Coast CFO/Partner, Ian Gorman from Wales, U.K. stated, “Kapaun already has extensive exposure within the U.S. military, Korean War Veterans, and the Roman Catholic Church, but we want to expand this audience to include persons from all walks of life who are interested in a story about a true American/Military/Christian hero.  We sincerely believe that the return to basics of good human behavior is increasingly attractive to large numbers of people from all backgrounds.

For more information, see the following:
Available anywhere books are sold.
The link to Amazon is provided below