The percentage of Americans who self-identify as LGBTQ+ has steadily risen over the last few years. The latest Gallup poll estimates that approximately 5.6% of US adults identify as LGBTQ+. Younger generations, such as Generation Z, or those born between 1997 and 2002, boast the highest number of people who identify as LGBTQ+. Despite this increase in people self-identifying as queer, the LGBTQ+ community still faces discrimination and lacks representation in the media.

The Cooperative Children’s Book Center determined only 3.1% of children and YA books featured at least one main character who identifies as LGBTQ+. Furthermore, books featuring gay characters regularly face backlash from homophobic parents, teachers, and sometimes politicians. In 2019, the Office for Intellectual Freedom of the American Library Association revealed eight of the ten most challenged books were challenged because they included LGBTQ+ content.

While more books featuring gay characters have emerged over the last few years, many of these narratives feature closeted teens and center around inspiring, heart-warming coming-out stories. These narratives aren’t the only queer stories to tell. YA author, Caleb Roehrig, recognizes the importance of coming-out stories but would like to see “stories about gays in space… solving mysteries.”

Alex, from Kira Leigh’s debut trilogy CONSTELIS VOSS, is a bisexual advanced android living on a dystopian planet-sized ship in the far future. Alex wakes up with a personality file from the 90s and immediately questions not only where he is, but who he is. He recognizes many of those around him, and a series of coincidences slowly reveals a pattern set against a backdrop of a dystopian, corrupt civilization with a conveniently very evil villain. This pattern is directly linked to Alex, who must solve the mystery because the fate of his friends and an entire planet-sized ship depends on it.

Leigh’s trilogy intricately weaves cyberpunk into a science fiction, psychological thriller while challenging common tropes wielded against LGBTQ+ characters, but with a twist. By centering realistic characters who are messy, complicated, and difficult, CONSTELIS VOSS aims to pinpoint the human element and deconstruct preconceived biases. Leigh wanted to tell their story using imperfect characters who fail with grace and repeat the same mistakes, as this tends to be missing from current queer narratives. D&D games, 90s anime, Russian literature, and the tech industry served as their inspiration for the CONSTELIS VOSS series.

Leigh’s series tackles common literary and media tropes, such as the femme fatale and overexaggerated queer characters. While diversity is a hot topic in the media right now, Leigh notes that diversity in 90s media had a less sterile presentation. Leigh recognizes this was the last time they’ve seen a character that looks like them in the mainstream media. Think about it for a moment: Without Googling it, name a bisexual male lead in a novel, film, or television show. Can’t think of one? Leigh couldn’t either, so they created one like them. 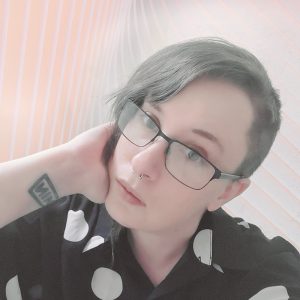 This 33 year old, neurodivergent, bisexual, transmasc writer began writing at 18 years old and has a background in art education. They stumbled into the technology industry’s freelance world, which inspired the mystery at the heart of CONSTELIS VOSS. When they’re not writing their novels, they’re drawing, creating new media art, writing music, and pushing the boundaries with any media tool available. Their website features Leigh’s drawings of the cast alongside mini mood music playlists for each character. Their artwork will appear on the covers of the CONSTELIS VOSS books.

Leigh maintains the CONSTELIS VOSS blog. One of their most popular blogs discusses the representation of minorities in the media, an issue Leigh is quite passionate about. This article explores the concept of “good representation”—an issue currently commonly discussed. While creating stereotypical marginalized characters is poor representation, Leigh asserts a different quandary, one CONSTELIS VOSS aims to critique. By purposely avoiding any trait deemed a stereotype, this act reaffixes these stereotypes to that specific marginalized group and creates boxes around which lived experiences matter in the media. Minorities are held to a higher standard than their peers in majority groups, as minorities constantly must fit within an inflexible set of characteristics for the majority to accept them. Leigh identifies the hegemonic messaging towards queer people as, “Be good, be better, be less loud, be less problematic, be easily digestible, never fuck up, don’t be as horny as the straights, lest you reinforce a stereotype and signal to society you are the thing Society Thinks You Are.”

One of Leigh’s hopes for this series is that their readers challenge their own beliefs and implicit biases against the LGBTQIAA+ community and other marginalized groups. They recognize that the world will not improve until people collectively challenge their preconceptions. Entertainment, Leigh insists, is a way in which to teach these lessons enjoyably.

“Welcome to CONSTELIS VOSS, the anime-inspired, psychological sci-fi trilogy nobody asked for, but everyone (probably) deserves.” The first book in the trilogy, “Colour Theory”, is available for purchase here.

Please consider this your warning for a work of fiction, which exists as a metacritique of the politics of power told through a space opera through one vector of a reality painted dystopic.

I ask only one thing of you, should you find yourself skimming its pages—enter this self-aware living landscape and question everything.

I hope it teaches who it must, and comforts those I wish to reach. I aim to let my readers know I see them in all their complicated inner paintings.

Good luck, and know that I love you desperately.